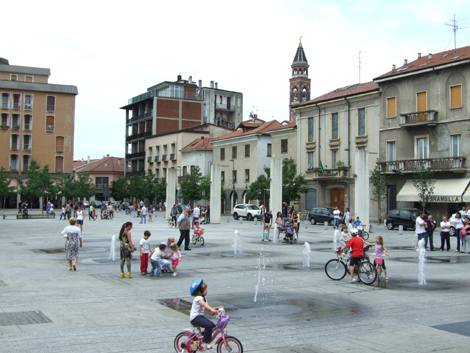 Piazza Libertà took shape in 1934 following the demolition of the old parish church (1933) and of some traditional courtyards (Curt di Pagan). The realization of the square, then dedicated to King Vittorio Emanuele III, was the most important intervention of urban transformation to leave its mark on the centre of Lissone. In 1936 the square was embellished with a fountain and, since 1940, was characterised by the construction of the Casa del Fascio, now Palazzo Terragni. The current denomination of the square dates to the period immediately following the Liberation. The present arrangement of the square highlights Villa Mussi (18th century) to the West, thanks to an avenue of trees planted in front of the villa itself. In the area in front of Villa Mussi there is a square portion of cobblestone paving - rizzada - that recalls traditional 18th century paving. In place of the original fountain - moved to Piazza IV Novembre at the end of 2006 - is a series of sixteen small fountains, which together with sixteen agstones of natural stone and sixteen trees situated in correspondence to via Paradiso, makes reference to the façade of Palazzo Terragni. The small fountains evoke the work of the "lixiones ", a special unit of Roman Legion water carriers that, according to some historians, occupied this area in the 1st century AD. The reinforced concrete columns on the North side spell the letters of the word VITRUM, carved into their bases, to pay tribute to the principle of transparency in rationalist architecture.