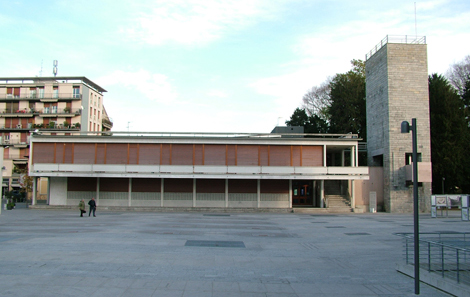 Designed by the architects Giuseppe Terragni (1904-1943) and Antonio Carminati (1894-1970), this palazzo is a powerful expression of Italian Rationalism. Built between 1938 and 1940 as the Headquarters of the local Fascio and to host the offices and the events of the Fascist regime, after the Liberation - with the name "Casa del Popolo" (House of the people) - it was used as a location for political parties and public corporations and associations. The cinema-theatre-auditorium hall maintains its original purpose. A two-storey building , it is characteri sed by wide windows symboli sing the intent of the Fascist regime's openness towards the people, and is supported by the solidity of the Moltrasio stone used in the construction of the Lictorial Tower, which contains the Arengario and the War Memorial. Bought by the Comune di Lissone in 1968, between 1972-1974 it underwent restoration by the architects Lorenzo Forges Davanzati and Pietro Ranzani, and again in 2001 for preservation purposes by the architects Paolo Rossetti and Raffaele Penco. The original project by Terragni-Carminati, which inscribes the building in a 'golden section', is still unfinished in the North wing, because the demolition of the adjacent buildings has never been completed. In 1975 the building was officially named Palazzo Terragni.