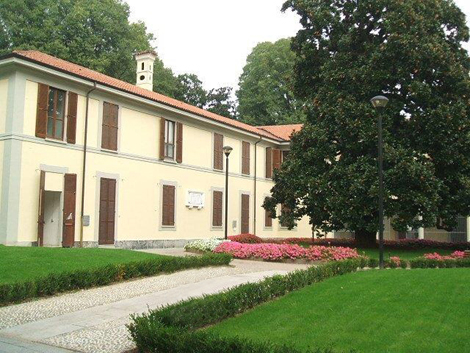 This building, dating originally from the 18th century, is two stories high and includes an ample garden; it was built by the Candiani Counts in a neoclassical style to serve as a noble country mansion. In the maps of the land register of 1858, the compound is shown as a structure with three wings enclosed by a portico to the South, an internal courtyard and a vehicle entrance on via Paradiso; at that time the building belonged to the Magatti family, who bought it from the Battaglia Counts. In 1910 it was acquired by the Comune di Lissone (City of Lissone) to be used as the location for the City Hall.

Over the years it underwent important remodelling works, also in connection with the urban evolution of the downtown area. With this came the removal of the South portico (1931) and the West wing (1963), which had hosted the Carabinieri headquarters until 1953. The original perimeter is now marked by the box hedges of the garden which surrounds the building. In 1986, the City Hall was moved to the new municipal building in via Gramsci, to contain all the services for Lissone's citizens. From 1996 to 2015, the building housed the Local Public Health Department (Asl).