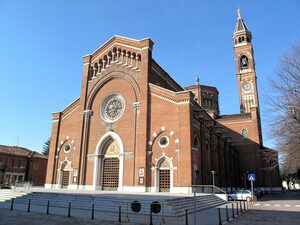 The earliest information regarding the existence of the church, dedicated originally only to Saint Peter, is contained in ancient documents dating from around the second half of the 13th century. During the 16th century, the building was subjected to extensive remodelling and enlargement which also included the construction of the bell tower; on this occasion the church was dedicated to the Apostles Peter and Paul. In the second half of the 18th century more radical changes were made, the most important of which was the reconstruction of the central nave. At the same time, the ossuary chapel was also built. At the end of the 18th century the principal chapel was enlarged and a big open space with a dome was built, both the works of the renowned Swiss architect Simone Cantoni. During the Fascist regime, the wish to build a large central square to allow the organisation of public meetings, markets and public assemblies, led in 1933 to the decision to demolish the ancient church, which was poorly preserved and no longer used after the consecration of the new Prepositurale (Parish Church) in 1926. The urban renewal that involved Piazza Libertà in 2007 revealed a part of the apses of the old parish church that was located in the centre of the square. The remains were made visible in agreement with the Soprintendenza (Oce of Cultural and Architectural Heritage of Milan).